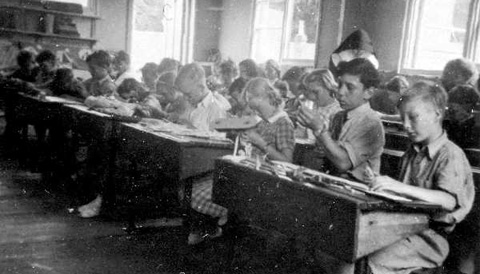 "My name is Dorothy Dyke but my maiden name was Barrington."

Thank you. And whereabouts were you born?

So, first of all, can I ask you what it was like to live in these streets back then?

And what was it like at the infant school you went to, South Road School?

"Oh it was a very happy time. But during the war, um, South Road School was used for about two years by the army. Men – they were billeted there and we went to Henry Harbin part-time. And the juniors went in the mornings and the seniors from Henry Harbin went in the afternoon, so we had only half-day education for a couple of years."

How did you feel when the old streets were demolished?

"Well, some of them needed to come down. Where we lived in South Road they were really very spacious terraced houses, and we had a little garden, and my mum and dad had lived there and bought the house and eventually had an inside bathroom done because, you know, in those days you didn’t have an inside bathroom – we had it altered. And really, in lots of ways it was a shame because Green Road is still there and they were similar to Green Road. And sometimes I wonder if they did the right thing to take all of them down. I mean, a lot of them in Lagland Street and the backways of Lagland Street, they were very poor."

What did you think of the new blocks of flats when they went in?